The 11th edition of the World Cup

The 2015 Cricket World Cup will be jointly hosted by Australia and New Zealand. The location of the games will be evenly split, with the day-night final match to be held at the Melbourne Cricket Ground on March 29.

Same format as the 2011 tournament 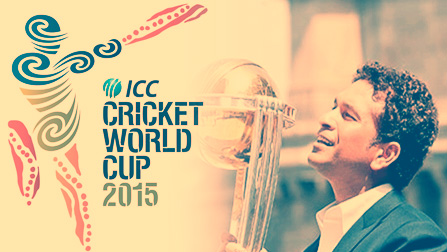 Sachin Tendulkar has been named as the 2015 Cricket World Cup Ambassador by the ICC for the second time.

The 2015 Cricket World Cup jointly hosted by Australia and New Zealand will feature 14 teams, the same number as the 2011 World Cup, giving associate and affiliate member nations a chance to participate. Per ICC regulations, the 10 ICC full member nations qualify for the tournament automatically. 49 matches will be played in 14 venues with Australia staging 26 games while New Zealand hosts 23 games. The seven teams in two groups play each other once before the top four teams from each group qualify for the quarter-finals. The format ensures that each team gets to play a minimum of six matches even if they exit in the group stage. There will be a Super Over in the Cricket World Cup final if the match finishes as a tie.

The 2019 Cricket World Cup will be hosted by England. This will be the twelfth World Cup competition, and the fifth time it has been held in England.

The Cricket World Cup is the world's third largest and most viewed sporting event, behind soccer's World Cup and the Summer Olympic Games. The 2007 World Cup will be televised in over 200 countries to a viewing audience estimated at more than two billion television viewers.
It is the first time the Cricket World Cup has been held in the Caribbean.
Trivia: The United States contingent lobbied strongly for matches to be staged at its newly built cricket ground in Lauderhill, Florida, but the ICC decided to award all matches to Caribbean nations.

Karen Rolton became only the second player to make a century in a Women's World Cup final as Australia outclassed India by 98 runs to win the trophy. Rolton hit 11 fours in her 107 not out off 138 balls at Centurion Park. She put on 139 for the fourth wicket with Indian-born Lisa Sthalekar, who was caught and bowled in the final over of Australia's innings for 55.
Four run outs wrecked India's hopes and Cathryn Fitzpatrick picked up two late wickets as they were all out for 117.

Free Windows 8.1 App: The latest Cricket news from your favorite websites. You can also add new RSS feeds based on your interests to see them all in one place. Works on any device that supports Win 8.