The 11th edition of the World Cup

The 2015 Cricket World Cup will be jointly hosted by Australia and New Zealand. The location of the games will be evenly split, with the day-night final match to be held at the Melbourne Cricket Ground on March 29.

Australia vs India at Adelaide (Warm Up)

India vs Afghanistan at Adelaide (Warm Up)

India comfortably won its opening World Cup clash, beating rivals Pakistan by 76 runs at the Adelaide Oval. Man-of-the-Match Virat Kohli (107) helped the reigning champions to a defendable total of 7 for 300 with a vital century. Mohammed Shami (4 for 35) and Umesh Yadav (2 for 50), skittled Pakistan for 224 despite some fightback by Skipper Misbah-ul-Haq (76) and opener Ahmed Shehzad (46).

Reported Earlier: More than a billion people are expected to watch Sunday's cricket match between the traditional rivals India and Pakistan. India have an overwhelming 5-0 record in the 50-over World Cup since the two teams were first pitted against each other at the ICC event in the 1992 edition in Sydney. The last such contest, the semi-final of 2011, was watched by around 150 million people worldwide, the biggest audience for any sporting event that year. On Friday, Indian Prime Minister Narendra Modi called his Pakistani counterpart Nawaz Sharif to wish Pakistan luck in the World Cup.

India have named their final squad for the ICC Cricket World Cup 2015. The MS Dhoni led-team has only four members - Dhoni, Kohli, Raina and Ashwin - from the victorious 2011 campaign. The nucleus of the squad is the same which helped India win the Champions Trophy one-day tournament in England in 2013. Sandeep Patel-led selection panel has dropped Yuvraj Singh and Robin Uthappa, whereas Stuart Binny has been included. India has every chance of qualifying for the quarterfinals as there are relatively weaker teams in the two groups. The likely opponents for India in the quarterfinal stage are either New Zealand or Sri Lanka. 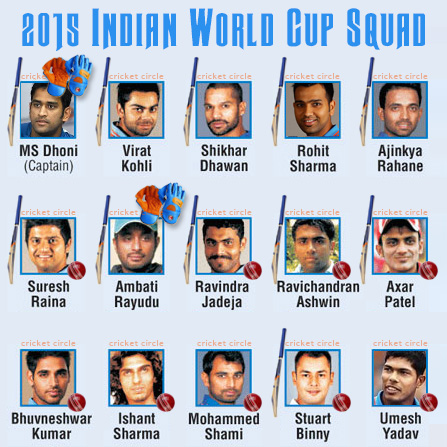 The 2015 Indian World Cup Team in their new jerseys by BCCI and NIKE.

India's selectors chose youth over experience and form while announcing a 30-man probables squad for the ICC Cricket World Cup 2015. The bowling is packed with seamers, with eight frontline pacers, while the batting, while lead by MS Dhoni, will have Virat Kohli, Shikhar Dhawan, Rohit Sharma, Ajinkya Rahane, Suresh Raina and Ambati Rayudu. Seniors like Virender Sehwag, Gautam Gambhir, Yuvraj Singh, Harbhajan Singh and Zaheer Khan, who were integral parts of India's 2011 World Cup triumph, were left out. 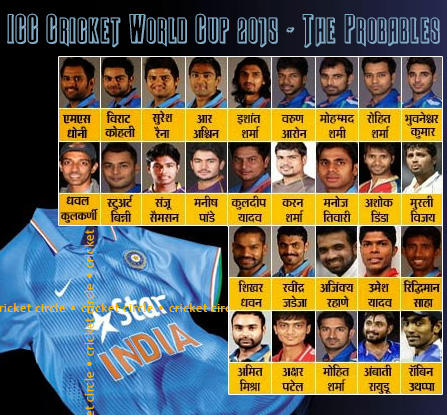 Free Windows 8.1 App: The latest Cricket news from your favorite websites. You can also add new RSS feeds based on your interests to see them all in one place. Works on any device that supports Win 8.